“Can you keep a secret?”

That question always seems to grab my attention like a bad joke I always keep falling for. I’m not in the business of keeping secrets. That  just  goes against the grain of what I do in the world of distributing information in the form of imagery to the public.

The voice on the other end of the conversation was Glen Campbell’s publicist.

“Glen is turning 60 next week and Kim (his wife), Debby (his daughter) and some of his family and some folks in the business are throwing a surprise birthday party for him there in Branson. We need some photos of the party for distribution and for the family.”

This was a happy time for Campbell following a less than productive period when his music sales seemed to have fallen off the public’s radar. He had a theatre in Branson (The Glen Campbell Goodtime Theatre) and ticket sales were strong. He had a home in Arizona for the off season and golf in his off time. And, he had a wife that he often credited during backstage dressing room interviews with helping him to turn things around.

The surprise party was to be at a Branson restaurant that had been closed for the event on a Sunday afternoon the day before his actual 60th birthday on April 22, 1996.  The three or four dozen invited guests huddled in the dark as Campbell and his wife arrived for what he thought was a quiet Sunday afternoon dinner. 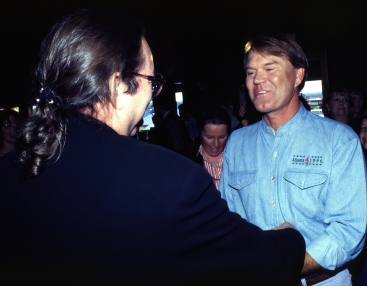 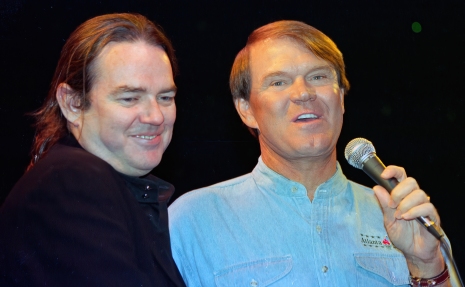 Jimmy Webb and Glen Campbell give an impromptu performance.

Among some of the guests he seemed particularly surprised to see was Jimmy Webb who wrote and collaborated with Campbell on many of his hits including, “By the Time I Get to Phoenix”, “Wichita Lineman” and “Galveston”. At one point Campbell and Webb took to the microphone and keyboard and entertained the guests with songs from some of their collaborative work.

Guests who couldn’t make the trip to Branson sent video greetings. Campbell and his family watched and enjoyed with much laughter on a big screen. The only subdued moment came when Campbell watched a video greeting from Annie Denver, John Denver’s ex-wife. Campbell had recorded “Annie’s Song”, a piece Denver wrote and also recorded as an ode to his wife in the early 1970’s.

I remember Campbell and his wife watching her greeting and responding to himself, almost inaudibly, “Annie, Annie…awe Annie.” Perhaps he was remembering the same demons in his life that had plagued John and Annie Denver. Little did anyone know that a year and a half later, John Denver would die in a plane crash.

Good times can be fleeting for anybody as the Campbell family all too well knows. As his 78th birthday approaches on April 22, 2014, he has been moved to a care facility for Alzheimer’s patients. The seconds in his own “Goodtime Hour” may have ticked away but he leaves behind a treasure trove of hauntingly beautiful songs for the rest of us.

"Wasteland" in the Ozarks A Biker's Funeral Al Gore Stumps From a Block Andy Williams-A Class Act A Silent Bond Can You Keep A Secret? Chained Smoker Death Sentence Commuted: An Epiphany For Me Facial Expressions and a Carnival Sideshow FAMOUS PEOPLE Fishing with "W" Frozen Forms Hot days and Dog days in the Ozarks I'm Alive!...part two MANHUNT...but without the Hollywood ending Me And The KKK: close encounters of the strange kind MISFIRE! Mobsters, Terrorists and Shell Games...Oh My PHOTO STORIES QUICK SHOTS Stumped; No Poker Face Here THE OZARKS Trout Day-Same Song; New Tune Two Clenched Fists; Two Slices from the ’70s Uncategorized When “Funny” Throws Its Hat Into The Political Ring
Loading Comments...