Kids are always a sure bet when you are looking for great facial expressions and facial expressions “sell” the photo. The year was 1977 so the rules of engagement when photographing children (even if they are in a public area) have changed a little since then and with good reason.
Unless you can show (i.e. media credentials issued by a media outlet) that you are shooting for a legitimate purpose, you will likely be viewed with some suspicion when photographing children. Check with a parent or event organizer first.
In this case, the event was a summertime “parking lot carnival” in southern Missouri, 1977. 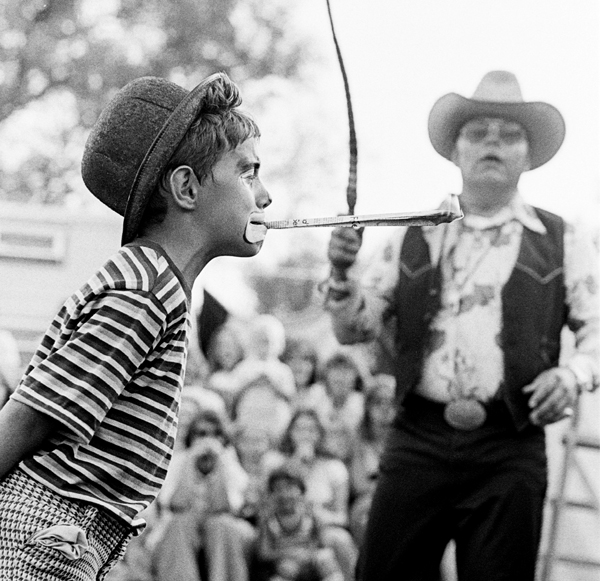 A small boy grips a burning piece of paper in his teeth as his father prepares to "whip it" from his mouth. (copyright John S. Stewart)

The boy holding the burning piece of paper between his quivering lips and his father preparing to whip out before the flame reaches his son’s face provided the high drama on this steamy summer evening. Think of the summer vacation memories that kid now has. 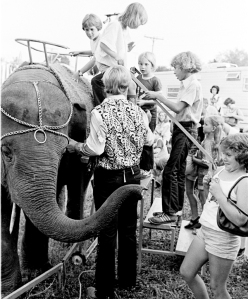 The elephant ride shot was a pretty ordinary shot until the last second when the elephant decided to greet the little girl the way elephants do and she recoiled with a squeal.

Unfortunately, my feet had been planted and I was unable to get an angle with a less cluttered background and a more straight on shot of her facial expression.

"Wasteland" in the Ozarks A Biker's Funeral Al Gore Stumps From a Block Andy Williams-A Class Act A Silent Bond Can You Keep A Secret? Chained Smoker Death Sentence Commuted: An Epiphany For Me Facial Expressions and a Carnival Sideshow FAMOUS PEOPLE Fishing with "W" Frozen Forms Hot days and Dog days in the Ozarks I'm Alive!...part two MANHUNT...but without the Hollywood ending Me And The KKK: close encounters of the strange kind MISFIRE! Mobsters, Terrorists and Shell Games...Oh My PHOTO STORIES QUICK SHOTS Stumped; No Poker Face Here THE OZARKS Trout Day-Same Song; New Tune Two Clenched Fists; Two Slices from the ’70s Uncategorized When “Funny” Throws Its Hat Into The Political Ring
Loading Comments...