Three weeks before the 2000 election when George W. Bush eked out a very contested victory over Al Gore, the governor made a stop in the Ozarks in support of Roy Blunt who was running for the 7th district house seat. 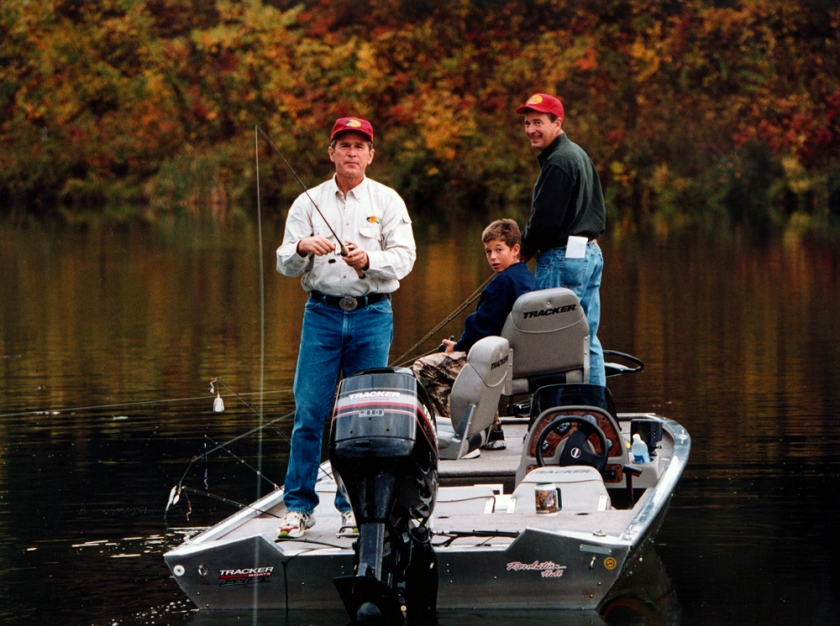 He was also planning a brief rest and relaxation period away from the campaign and media as the house guest of Bass Pro Shops owner, Johnny Morris. The night before they were to go fishing together, I got a call from an Associated Press reporter telling me he had been in contact with a Bush aide and the governor had agreed to allow one still photographer to come along but no reporters or video cameras. They would need my social security number for a quick background check and since there wasn’t time to get a “Letter of Introduction” for me to present to the Secret Service, I would need to bring as much identification as I had.

Before the sun was up the next morning, I made my way to the private lake east of Springfield. When I turned off the asphalt road to the private gravel drive, two men in dark polo shirts and sport coats stepped to the center of the drive and motioned me to stop. One stepped to my window and asked, “Could we help you?”

They never identified themselves as Secret Service agents but the ear pieces and slight bulge under their coats were pretty good indications I was in the right place.

I explained my early morning mission and he seemed to have no knowledge of it and asked if I had any identification. I handed him my driver’s license, media photo ID tag, and my passport. The two stepped back and looked at each one turning them over a couple of times and spoke in low inaudible tones.

Thinking there was some SNAFU, I started to explain further who made the arrangements when one of the men looked up and said, “We know. We’ve been expecting you. Did you have any trouble finding the place?”

Relieved, I quickly shot back, “Oh, no. Not at all.” There was about ten seconds of silence while I rethought my answer and amended it to, “Well, actually I went about a quarter-mile too far and had to turn around and come back.” Still looking at my photo IDs and without looking up, the agent replied, “Yeah, we saw you.” I’m now thinking to myself, ‘You’re off to a great start. You fibbed to a Secret Service agent and he knows it.’

“Ok, you’re fine. We just need you to step out of the car and place your camera bag on the hood.” In lieu of an electronic metal detector or wand, I was treated to an old-fashioned pat down by hand while the other agent looked through my camera bag.  No big deal and not nearly as invasive as today’s airport TSA pat downs.

“Ok, one of the Governor’s aides is waiting for you down by the dock. He will direct you and the Governor will be along shortly.”

The aide and I would be in a tiny…and I mean tiny… jon boat that was barely 10 feet long and had two bench seats wide enough for one person each. The aide would be at the helm manning the 8 h.p. motor. The second boat was a 16 foot open aluminum fishing boat. It contained three Secret Service agents (one drove) and Morris’ brother-in-law who was along as Morris’ photographer. The third boat was a first class bass boat complete with pedestal deck chairs. It contained Governor Bush, Johnny Morris and Morris’ son.

I was told my time on the trip would be limited to about 15 minutes. The Governor wanted this to be a truly private affair and there would be no questions or interview. Conditions were not great for great shots but that’s what makes photojournalism what it is. You deal with what you have in front of you. It was a beautiful crisp fall morning but the sun hadn’t been up long so light readings were still pretty low meaning slow shutter speeds for the next 3o minutes or so even using ISO 400 film. I was going to be in a less than rock solid boat so a tripod or monopod really wouldn’t help.

I stepped onto the dock and it seemed like all eyes from boat #2 were on me as I approached Governor Bush who was bent over closing up his tackle box. I introduced myself and he stood up and introduced himself and said in that GWB twang, “Boy, it’s pretty early in the morning to come out just to take some pictures.”

Everyone piled into their assigned boat and the bass boat with Bush in it backed out of the boat slip. Morris was at the helm and stopped about 20 feet from the dock and said, “Why don’t throw one out here and see if you get any bites?”

I thought this would be a better opportunity to shoot from the dock and not the boat I was in that would not be still no matter how still I was. So I scrambled back onto the dock as did the governor’s aide and as did two of the Secret Service agents. The dock was one of those with a metal roof but not the heavy commercial docks that feel firm under foot. When anyone walked, the dock gave way a little making it only a little more stable than the boat I just left.

I braced myself and camera against one of the uprights closest to where the Bush boat was. Behind me at the front of the boat slip the two agents continued to move and reposition themselves making the dock sway under me. I looked back at the aide and said, “Can you…?” nodding at the agents. He said, “Oh, sure, sure! Hey guys…can you be still?” I looked back to my left and saw two United States Secret Service field agents attached to a Presidential candidate frozen like mannequins at my request. Ok, it was a bit of a heady moment for about two seconds.

I was asking myself if he was doing this for my benefit which was a little unsettling but later learned that the bass they were going after often hang around docks and brush piles.

Bush got off his first cast I assume without any practice casts earlier because the lure landed on the roof of the dock shattering the early morning quiet only the way hard plastic on sheet metal can. His reaction and that of the others in his boat is what you see in the photo.

His second cast was better placed but still way long. The heavy bass lure designed to disturb the water as much as possible as it plows its way back to the rod remained airborne until it landed squarely on the head of one of the frozen secret service agents on the dock.

There was an audible grunt from behind me and a very concerned look from Bush who said, “Oh…you OK?” The agent dutifully replied, “Yes sir. I’m fine.”

There were no bass to be had by the dock so the flotilla of bass boat, photo boat and gun boat motored across the lake where there was a brushy shore and the casting started again. My 15 minute photo-op turned into 20 and then 25 and Bush finally said, “Well, I really would like to pull one in while you’re here but that may not happen.”

That must have been a cue for his aide because the aide indicated it was time for us to go back. No sooner had we pulled alongside the dock than out in the water across the lake we heard splashing and excited voices. We sat and listened and tried to see across the  100 yards or so. And then, when the quiet returned there came that unmistakable Texas twang, “Hey photographer. I got one.”

"Wasteland" in the Ozarks A Biker's Funeral Al Gore Stumps From a Block Andy Williams-A Class Act A Silent Bond Can You Keep A Secret? Chained Smoker Death Sentence Commuted: An Epiphany For Me Facial Expressions and a Carnival Sideshow FAMOUS PEOPLE Fishing with "W" Frozen Forms Hot days and Dog days in the Ozarks I'm Alive!...part two MANHUNT...but without the Hollywood ending Me And The KKK: close encounters of the strange kind MISFIRE! Mobsters, Terrorists and Shell Games...Oh My PHOTO STORIES QUICK SHOTS Stumped; No Poker Face Here THE OZARKS Trout Day-Same Song; New Tune Two Clenched Fists; Two Slices from the ’70s Uncategorized When “Funny” Throws Its Hat Into The Political Ring
Loading Comments...
%d bloggers like this: