“Well, you sure have some pretty rough, scruffy lookin’ friends”, the office secretary shot across her desk as I came through the door of the small Missouri town newspaper where I worked in 1978. 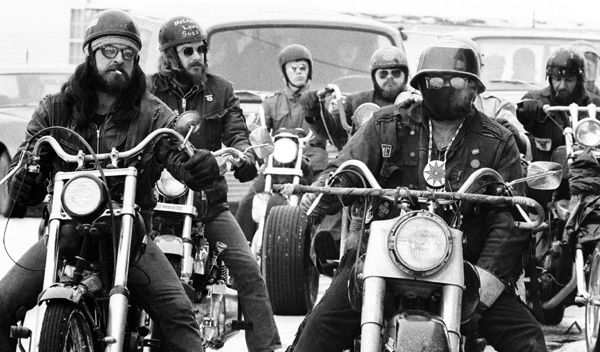 Friends of “Booger Red” line up for the funeral procession that will take him to his final resting place. “Hagen” is at right in the German helmet. (Photo copyrighted by John S. Stewart/LEFTeyeSTORIES)

Twenty minutes earlier, the office was full of a dozen or so leather jacketed tattooed (tattoos weren’t so mainstream then) motorcycle gang members wanting to see me. Their friend and fellow gang member, “Booger Red” had been ‘murdered’ and now they were going to bury him with a proper biker’s funeral.

Some weeks earlier I had taken a photo of a local teenaged boy being airlifted to a Shriners’ Burn Hospital after he ignited himself  with gasoline while filling up his motorcycle. His father, “Hagen” was the gang’s leader and wanted me to photograph their friend’s funeral. I was to go to his house where the gang had gathered and we would talk about it. O…K….sure why not?

Booger Red got his name from his flaming red hair and by his friends’ own description, he was a “booger”…mean. He was killed by a single gunshot to his chest through a screen door after he threatened the person inside with an ax during a drug deal gone bad. I was not going to argue with his friends whether he was “murdered” or killed in self-defense.

I arrived at Hagen’s house and was greeted in a quiet way like anyone arriving at a wake. The group, dressed in leathers accented with chains and images of skulls and fire was somber.

Years later while visiting an Amish household I would remember the

Mounted on their hogs, friends of Booger Red line up outside the funeral home. (Photo Copyrighted by John S. Stewart/LEFTeyeSTORIES)

similarities in the two experiences. None of the men, except the leader, would talk to me. When I made eye contact with the female members of the group, they would look away.

Hagen and I sat a table and he thanked me for coming and then outlined the next day’s funeral activities. There would be a traditional funeral at the local funeral home for “Booger’s” immediate family. Yes, Booger actually had a mother and siblings. After that, it was the gang’s show. There would be a motorcycle escort the fifteen miles to the grave site out in the country and graveside services.

Hagen went on to explain that after that at most biker funerals,  everyone stands around and drinks beer and puts their empties into the casket. Charming. That would not happen for Booger Red. The celebration would wait until that evening when there would be dancing and drinking ON his grave. There would also be a couple of vans parked there with a girl in each …there for the taking. Thanks but no thanks.

At this point a whirl wind of journalist ethics, morals and questions began spinning in my head. Do I even continue pursuing this story? It was unusual to have been granted such access without a great deal of rapport but was my presence as a journalist guiding the behavior of the subjects?

The day of the funeral was cold, rainy with a little sleet and snow mixed in. The procession would be stopped several times as biker after biker 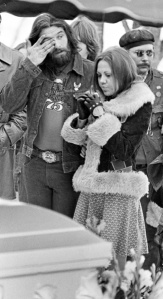 slid out on the slick pavement ending up on the ground in front of the hearse.

I didn’t go to the evening activities after the graveside services. Instead, I developed film, printed photos and worked on a full-page layout to present to the editor the next day. He went for it and it would run in that afternoon’s paper. Before the presses started to roll, one of the pressmen asked me, “How many extra copies do you want to run?” “Extras?” I replied. “That’s not my decision but I don’t think we’ll need any.” He assured me there would be a need and by six o’clock that evening he was pulling early run rejects (those first copies that come off the press before they have the ink adjusted correctly) out of the trash to put out in the now sold out boxes on the street.

The next morning the office secretary that had remarked about my rough-looking friends locked her eyes on me as I came in and said, “Do you know how many phone messages I have listened to this morning about your biker funeral story and I’m not even to the end of the tape?”

The break was about 50-50. Half  the readers loved it and half hated it

but everybody wanted to read about it. Some saw it as glorifying a seedy element of society and others were interested in getting a glimpse of a side they ordinarily would never see.

To me, that is why you do stories like this one.

2 thoughts on “A Biker’s Funeral”

"Wasteland" in the Ozarks A Biker's Funeral Al Gore Stumps From a Block Andy Williams-A Class Act A Silent Bond Can You Keep A Secret? Chained Smoker Death Sentence Commuted: An Epiphany For Me Facial Expressions and a Carnival Sideshow FAMOUS PEOPLE Fishing with "W" Frozen Forms Hot days and Dog days in the Ozarks I'm Alive!...part two MANHUNT...but without the Hollywood ending Me And The KKK: close encounters of the strange kind MISFIRE! Mobsters, Terrorists and Shell Games...Oh My PHOTO STORIES QUICK SHOTS Stumped; No Poker Face Here THE OZARKS Trout Day-Same Song; New Tune Two Clenched Fists; Two Slices from the ’70s Uncategorized When “Funny” Throws Its Hat Into The Political Ring
Loading Comments...
Comment
×
<span>%d</span> bloggers like this: