At first glance the photos seem to depict a classic manhunt in the rural mid-20th century South (except in this case the Ozarks) where the racist white lawmen and their dogs hunt down a young African-American man, shoot him and then stand around smoking cigarettes patting themselves on the back.

This was not the case here. I know. I was there. This is where real words have to fill in the blanks of those 1000 word essays that photos are suppose to deliver.

Minutes after firing a single rifle shot that ended the 3-day flight of fugitive Willie Joe Taylor, the sharpshooter kneels at his side. (Copyright John S. Stewart)

Following standard procedure, the patrolman removed Taylor’s shoes and was attempting to handcuff him when a struggle ensued. Taylor, an ex-marine, wrested the patrolman’s service revolver from him, put it to the patrolman’s head and pulled the trigger.

Only by the grace of God and a bullet that misfired did the patrolman escape unharmed.  But Taylor escaped on foot beginning a three-day manhunt through rugged Ozarks hills.

Sightings of  Taylor by residents of the hill country were many. Doors were locked and guns kept close by as lawmen pursued but always  just one step behind. A few close encounters reported that Taylor would “growl” and flee but not speak when confronted by residents checking outbuildings.

On the third day, I got word through an informed source that “today could be the day they get him.” The focus of the manhunt was now one county away in Camden County Missouri. I drove down the rural road where the command center was  located and found a string of 12-15 law enforcement vehicles from several county and state agencies parked beside the road. Amazingly, there were only two TV crews and one radio station there. I was the only still photographer.

Events like this were a lot less formal in 1977 than they are today. Maps were spread out across the trunk of a patrol car and if you weren’t too intrusive you could listen in on the discussion. Today those conversations are locked inside a mobile command unit van and media updates are issued periodically.

On this day law enforcement officers even shared their hot coffee in Styrofoam cups to fend off the cold drizzle that made everyone all the more hopeful for a quick end to the manhunt. Within 30 minutes of my arrival that hope came in the form of several more vehicles loaded with police tracking dogs from Indiana that were training at a police K-9 school 70 miles away in Strafford, Missouri.

Until now one or maybe two privately owned “bloodhounds” had been used without  success. Their primary “day jobs” were  running raccoons up trees during those fabled Ozarks coon hunts and keeping their owners warm on cold winter nights. They were being asked to do something that was a little out of their league. Plus, the cold drizzle was making any scent left by Taylor that much harder to follow.

Within 30 minutes after the newly arrived Indiana dogs were let out of their cars, handlers briefed at the back of a squad car and then disappearing over a nearby ridge, we began hearing the rapid chorus of barks that seemed to say, “we’re on to him.”

No one spoke. We couldn’t see what was happening on the other side of the ridge other than what was conjured up in our minds. The sound of the dogs’ excitement moved across the vista in front of us as everyone’s head panned right to left.

Still no one spoke. Coffee cups dropped to the ground and a rush to the cars followed. Lawmen and media drove a short distance up the road until we came to a drive with a closed gate where we left the cars to continue on foot. We ran past a house whose occupants stood watching wide-eyed and mouths hanging open as we scrambled over their barbed wire fence and continued up the hill.

A 3-day manhunt for fugitive Willie Joe Taylor ended with Taylor lying on the ground shot and his shooter kneeling beside him surrounded by a dozen or more lawmen. (Copyright John S. Stewart)

At the top of the hill I stopped to click off a few shots of what I saw in the field in front of  me. A dozen or more lawmen surrounded a figure lying on the ground with another figure kneeling beside him. We learned later the first shots we heard were gunshots fired into the air trying to get Taylor to stop after the dogs had flushed him out of the woods. The dogs were never let off their leads like you see in the movies. When he didn’t stop the last shot was fired by a young Missouri Water Patrol officer sharpshooter who took time to get into a sitting position on the ground to improve his aim. The single shot shattered Taylor’s femur dropping him to ground and rendering him unconscious. 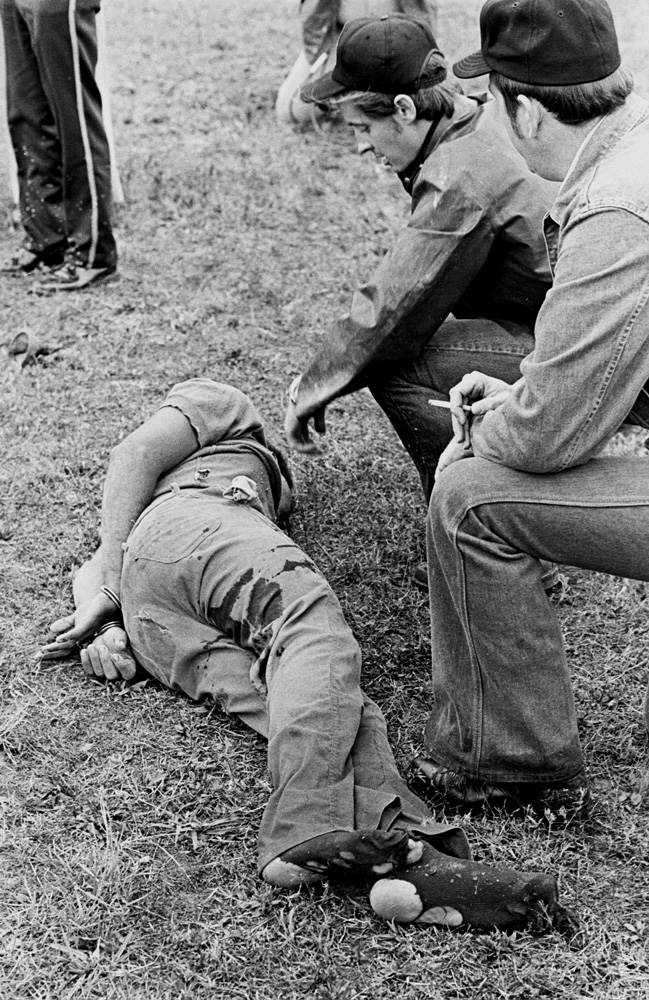 A Missouri Water Patrol sharpshooter (center) kneels at the fugitive's side minutes after felling him with a single shot in his leg. Taylor's torn socks are a testament to the three days he spent running shoeless in the Ozarks' woods. (Copyright John S. Stewart)

I ran up to the scene and dropped to my knees a few yards from Taylor’s feet. I remember seeing the scene in front of me but being so out of breath I worried I wouldn’t be able to hold the camera still enough to record it on film.

Taylor’s socks were in shreds from running without shoes for three days in the woods through two counties. Kneeling beside him was the Missouri Water Patrol officer who shot him. This was the non-Hollywood ending. He was obviously emotionally drained if not distraught. Other officers, older and

more experienced, put their hands on his shoulder as if to comfort rather than congratulate. The atmosphere was somber as they waited for paramedics to arrive. Few if any of them had felt what he was feeling now.

Even though Taylor would survive, the emotional trauma the officer felt ran deep. No amount of  hunting squirrels and deer that honed his skills to be able to do what he had done could prepare him for shooting another human no matter what that human  had done. That’s the part you don’t get in the movies.

2 thoughts on “MANHUNT…but without the Hollywood ending”

"Wasteland" in the Ozarks A Biker's Funeral Al Gore Stumps From a Block Andy Williams-A Class Act A Silent Bond Can You Keep A Secret? Chained Smoker Death Sentence Commuted: An Epiphany For Me Facial Expressions and a Carnival Sideshow FAMOUS PEOPLE Fishing with "W" Frozen Forms Hot days and Dog days in the Ozarks I'm Alive!...part two MANHUNT...but without the Hollywood ending Me And The KKK: close encounters of the strange kind MISFIRE! Mobsters, Terrorists and Shell Games...Oh My PHOTO STORIES QUICK SHOTS Stumped; No Poker Face Here THE OZARKS Trout Day-Same Song; New Tune Two Clenched Fists; Two Slices from the ’70s Uncategorized When “Funny” Throws Its Hat Into The Political Ring
Loading Comments...
%d bloggers like this: